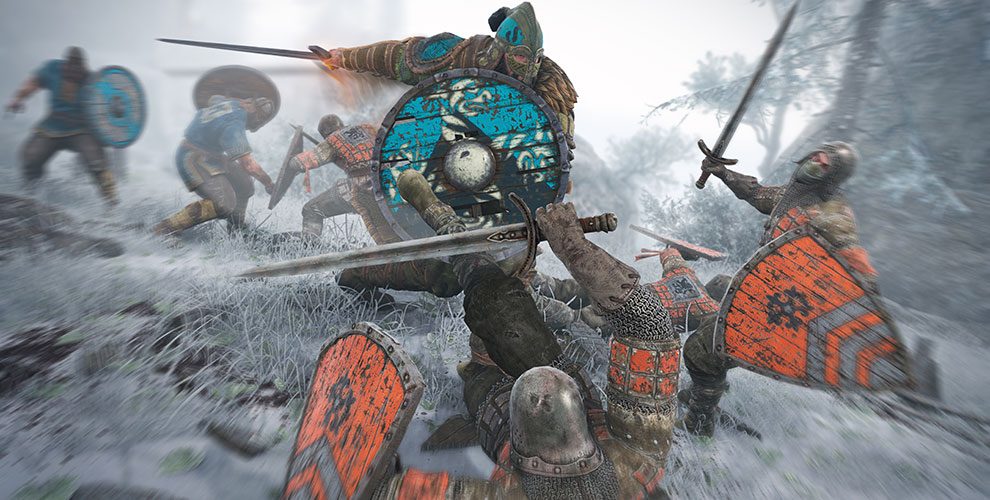 Here are the latest 4 trailers for “For Honor” which will be released in 2017. If you can’t wait to play the game, make sure to sign up for the closed beta that will be starting in January over at forhonorgame.com/war

Check out the full press release below

SAN FRANCISCO — December 14, 2016 — Today, Ubisoft® announced that the For Honor Closed Beta will be available in January 2017. Players will be able to step onto the war-torn lands of Ashfeld, Valkenheim and Myre with brand new multiplayer experiences that showcase the age old war between Vikings, Samurai and Knights.

Coinciding with the closed beta, Ubisoft will launch War of the Factions, a pre-launch limited time event that will answer the question: When the might Vikings, Samurai and Knights finally collide on the same battlefield…who will reign supreme?

War of the Factions will track all multiplayer activity across all platforms in the closed beta launching January 2017. Rewards will be given to warriors participating in the beta as well as the winning faction.

Players can charge into battle with a cast of 12 unique heroes across the three Factions. Today, Ubisoft showcased two new Heavy heroes, the Samurai Shugoki and the Viking Warlord, and a new Assassin, the Knight Peacekeeper, which offer even more depth to the competitive multiplayer experience:

Ubisoft also debuted its brand-new metagame, Faction War, the persistent cross-platform conflict between the Knights, Vikings and Samurai. Players begin by pledging their sword to the faction of their choice. Every multiplayer battle in For Honor impacts the world as players earn War Assets based on their personal performance in matches. These War Assets can be deployed and spent helping players conquer and defend territories. Every match makes a difference as all players contribute to the glory of their faction during each 10-week competitive multiplayer season. Once the season ends, all For Honor players will receive rewards based on the rank of their faction. At the end of each season the Faction War resets and resumes after an off-season period.

Players will learn why these brave heroes have gone to war with one another in the new campaign trailer that dives deeper into the world of For Honor and Apollyon, the main antagonist of the game, who seeks to incite war amongst the various factions. The new trailer details the motivations of the three factions including the Knights of the Iron Legion, the Warborn Viking clans and the Samurai of the Dawn Empire. Players will unravel the harsh and unforgiving world of For Honor as they play through the thrilling story campaign in single player or online co-op.

Players can get a taste of what For Honor has to offer by registering for the Beta at www.forhonorgame.com/war.

Developed by Ubisoft Montreal in collaboration with other Ubisoft studios*, For Honor offers an engaging campaign and thrilling multiplayer. Players embody warriors of the three Great Factions – the bold Knights, the brutal Vikings and the enigmatic Samurai – fighting to the death on intense and believable melee battlefields. The game’s innovative combat system puts players in total control of their warriors, allowing them to utilize the unique skills and combat style of each hero to vanquish all enemies who stand in their way. For Honor will be available on February 14, 2017.

For more information about For Honor, please follow us on Facebook at www.facebook.com/ForHonorGame and on Twitter at www.twitter.com/ForHonorGame. For the latest on all of Ubisoft’s games, please visit www.ubiblog.com.

Ubisoft is a leading creator, publisher and distributor of interactive entertainment and services, with a rich portfolio of world-renowned brands, including Assassin’s Creed, Just Dance, Tom Clancy’s video game series, Rayman, Far Cry and Watch Dogs. The teams throughout Ubisoft’s worldwide network of studios and business offices are committed to delivering original and memorable gaming experiences across all popular platforms, including consoles, mobile phones, tablets and PCs. For the 2015-16 fiscal year Ubisoft generated sales of €1,394 million. To learn more, please visit www.ubisoftgroup.com.