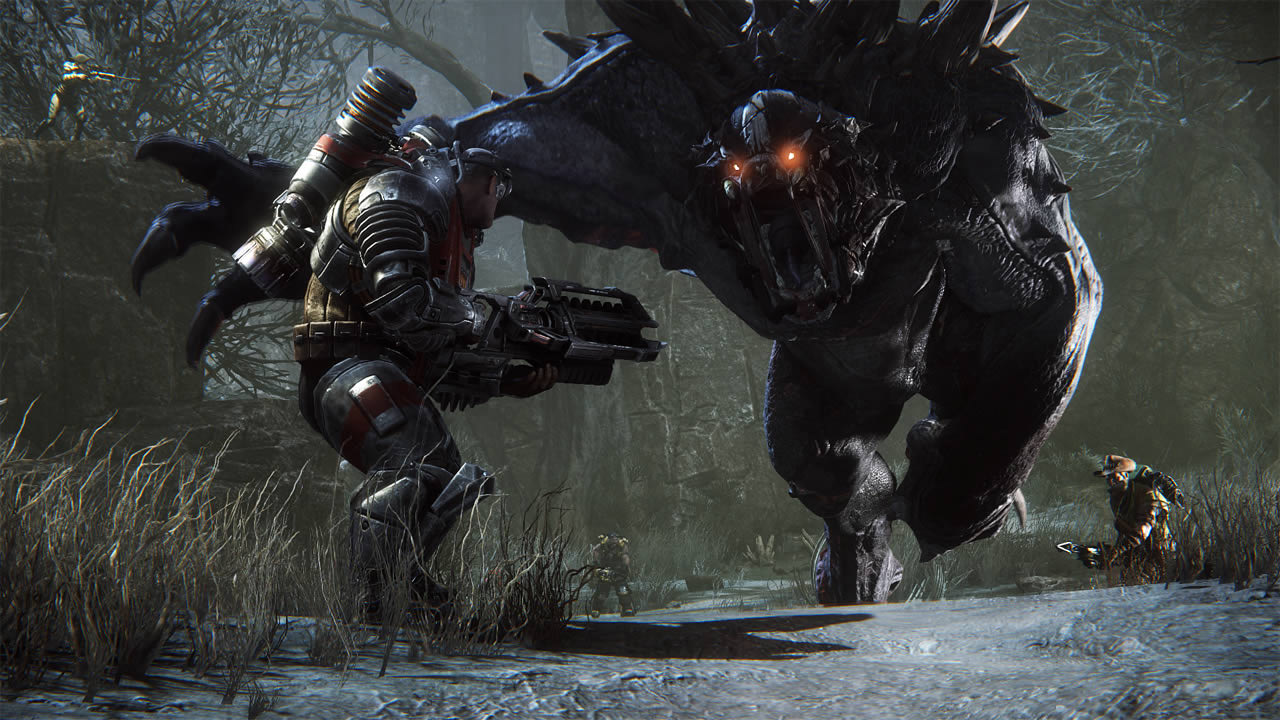 When I first heard that the team behind the original Left 4 Dead game was developing some sort of 4 v 1 monster hunting game I was a bit skeptical. It sounded like a cool premise, but it was hard to picture in my mind how that could be a balanced game, or have sustainable interest factor.

When the first videos were released I was surprised at how good the game looked and how polished everything was. It was definitely starting to peak my interest a bit as more and more videos and information was released. It wasn’t until I watched a live stream of the game that I decided that I would give it a try as it looked like it could be a lot of fun to play with friends. And that was one of my mistakes, I don’t have any friends… Ok, just kidding, I do have friends, but I only have a handful of friends that consider themselves “gamers” and enjoy playing video games on a regular basis. Because of this, I was pretty sure that maybe only one of my other friends would purchase this game if I told him it was awesome and that we should both get it. Thankfully I did not do that.

I decided to hold off on pre-ordering the game until after I got a chance to play the public beta that 2K Games was promoting. Why spend money on a game to play it for the first time, when you can just play it during the beta period.

I understand that the beta is just that, a beta, and it only had one of the 2 overall game modes available to play, but as soon as I started up the first game I realized that this was going to get very old very fast.

At this point in this article, these things pertain to both the beta and the full game, which I have now had a chance to play. The gameplay and the hunt game mode didn’t really change from the beta to the retail version.

The Skirmish game mode is what was promised in the tagline of the game, 4 players vs 1 monster in a big game of hide and seek. Well, just like hide and seek, there’s only so many times you can play it until it becomes boring and repetitive. And once you start playing against players that have leveled up their monsters it can become pretty annoying at times. And on top of that, this is definitely a game where it’s all about teamwork. So if you don’t communicate with your team about stuff, then you’re most likely not going to survive. Or if players on your team (if you’re not the monster) don’t know their roles, then you’re definitely going to die. Seriously, if you’re the medic your job is not to shoot at the monster the whole time, heal your damn team! If everyone is fully healed, then you can snipe or tranquilize the monster, but don’t just sit there with your gun out the whole time, it’s not going to help.

If you have a good team and you work together, the game can be kind of fun for a while, but as I said, it gets really repetitive and boring after a while because you’re doing the same thing over and over again. Thankfully there is another game mode included in the retail game, called Evacuation, but in the end, it’s still a lot of the same.

In Evacuation there are 5 rounds and depending on who wins each round determines which buffs are added for one team or the other in the next round. So if the monster wins round 1 then there may be more man eating plants trying to eat the hunters in round two. Or if the hunters win a round there might be little health stations around the map that can heal the hunters. Things like that. And in addition to the buff aspect in Evacuation, each round allows you to vote on which game mode to play, whether that’s hunt, egg hunt, rescue, or whatever. There’s only a few game modes in general and they all basically boil down to the monster trying to kill the hunters while they try to kill the monster. Yes, there are objectives in those other game modes, but the reality is the monster is going to find you and you’re going to try to kill it, the objectives just become secondary. Couple that in with the fact that you’re basically just chasing the monster around the map in a straight line, and not actually “seeking” him out, it gets pretty boring pretty quickly.

So while I did enjoy the Evacuation mode a bit more than just the hunt, it’s still just a lot of the same. And then on top of it, a full 5 round Evacuation match is a commitment. I think the last game I played took almost 2 hours to play through all 5 rounds. And with a newborn daughter laying around, a 2-hour nap is like gold to me that I would rather spend playing multiple things if I’m choosing to use that time to play games.

Aside from the game play, there are a few other things about the game that annoy me as well, which I’ve shown some examples of in the video in this post. For one, the load times are super long and the time between games is ludicrous. I don’t want to wait a full 2 minutes between each round for the next one to start, and then when that countdown timer finishes you have to wait for the game to load. At some points it seems like it takes forever to load a cut scene which then stops in order to actually load the map. Needless to say it takes a long time to get into a match, which is valuable time lost when trying to game while the baby is sleeping.

One other thing that really annoyed me about the game is when it dumps you into a match that has already started and you have to start controlling a player that had been controlled by a bot. It’s not as bad when you take over as a hunter (as long as the monster isn’t around), but taking over as the monster is pretty annoying because the hunters are pretty much always right on your ass, so if you don’t know which direction to head, or you stop for a second to gather your bearings, then the hunters are going to trap you and murder you right away… which is evident by the video in this post.

So overall, I am pretty disappointed in Evolve and I feel like it could have been so much more… or maybe not, maybe they should just give the people what they want and make Left 4 Dead 3 already!

Has anyone else played this game and have any thoughts on it? Does it get better if you level up the characters or something? Am I doing something wrong? Left 4 Dead 3?

Why We Hate Destiny
My Year With Gamefly: Is It Worth It?
Comment