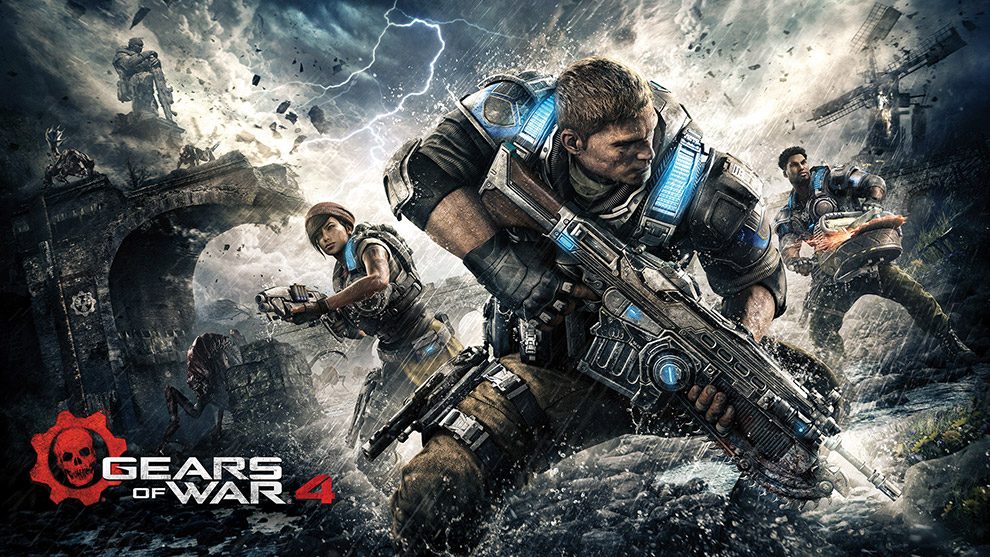 Fair warning, I do not care for the Gears of War multiplayer gameplay, it’s just not my style. Because of that I will refrain from discussing it during this review only because it’s totally unfair to those that do enjoy it. I don’t know if it’s the fact that no matter how much I practiced, I just couldn’t get good at it, or if it’s the fact that it seemed like everyone else was so much better with the sniper rifles and rolling into shotgun kills, than I was. Either way, I don’t even bother playing the multiplayer anymore outside of the occasional horde mode round, but even that mode doesn’t get played a lot since none of my friends have Gears of War 4.

The last time I played a Gears of War game was Gears of War 3, which was released over 5 years ago. However, it didn’t take long for the familiar gameplay to resonate within me again. The Gears of War 4 storyline takes place 25 years after the Locust’s and the Lambent were run out of Sera by Marcus Fenix. Marcus has now disappeared and is living his life in seclusion while his son J.D. continues on his fight. J.D. was a member of the Cog until he disagreed with Jinn’s policies and decided to join a group of outsiders.

The game starts out with a memorial ceremony where Jinn describes the events that happened 25 years ago. As she’s describing the events the gameplay jumps around as you play through the certain mini-storylines that she is telling the crowd about. It’s a cool way to bring you up to speed on the game, and allow you to actually play through the backstory instead of just listening to someone talk about them. It’s very similar in the way that Battlefield 1 starts out by just dumping you right into the war without warning.

After you play through the game’s intro you begin to follow J.D. and his faithful crew as they search for a fabricator to bring back to their village. Jinn and her robot army are trying to do everything they can to stop them, but as the game progresses, you realize that the robots aren’t the only threat to the outsiders.

After their village is attacked by a new species of creature dubbed, the “Swarm”, J.D., Del, and Kait set out to figure out what those creatures are, as well as trying to find out what happened to Kait’s mother, Reyna, as one of the Swarm creatures took her captive.

Thinking that it could be the Locusts coming back, J.D. and company seek out the help of J.D.’s dad… Marcus Fenix. Marcus has secluded himself away from the general public and definitely doesn’t have a great relationship with his son, but J.D. convinces him to come along and help them save Reyna.

The rest of the story plays out as the group fights through the Swarm on their way to rescue Reyna and rid the world of this newly discovered evil.

At times the storyline reminded me of the Halo storyline with “The Flood”, with the secondary race of creatures and their weird mutated bodies, but overall I really enjoyed the single player campaign. I actually watched every single cut scene as I progressed through the five acts of the game, when normally I would skip them and just get to the gameplay.

I played through the game on the hardcore difficulty level and I thought that it was just the right amount of difficulty for the experience that I have with the Gears of War series, and shooter games in general. It wasn’t too easy to the point where I was just running through everything with reckless abandon, but it also wasn’t too hard that I was constantly dying every two minutes to the point where I wanted to give up. I will say though, that I absolutely hate the parts of the game where you have to run through the lightning storms without getting hit. Those were the only points in the game where it felt like I died like 20 times before I made it through to where I needed to go, and it was super annoying. I did run into a few other points where enemies with the torque bow had deadly aim, but outside of that I didn’t have too much trouble.

I really enjoyed the various boss battles throughout the game, and I liked the fact that it wasn’t too difficult to figure out what you had to do in order to defeat the enemy, but it took a decent amount of time to kill them. The actual enemy AI was a bit clunky at time, as was the friendly AI, but overall I never had too much of a problem with them. I like the fact that you’re playing through the game with 2-3 other AI controlled friendly players, so if you get “downed” they can quickly come over and revive you and you have less of a chance of having to restart the section completely.

I’ve enjoyed the Gears of War series up until this point and Gears of War 4 feels like those games. Even though you’re not controlling the characters that we know and love from the previous games, it doesn’t feel disconnected from the world that was built by the previous games. I think the idea of introducing the main character as someone’s kid is the obvious, almost cliche, way to keep it connected, but in this case I think it worked well and I was never mad that I wasn’t playing as Marcus Fenix.

I thought the storyline was very well done, and everything flowed very well. If you’re a fan of the Gears of War franchise I think you’ll be pretty happy with this installment.

Let us know in the comments what you thought of the game. If you have played the multiplayer in the past and have experience with the Gears 4 multiplayer we’d also like to hear your comments, since we’re not huge fans of it.

Check out some of our other video game reviews.