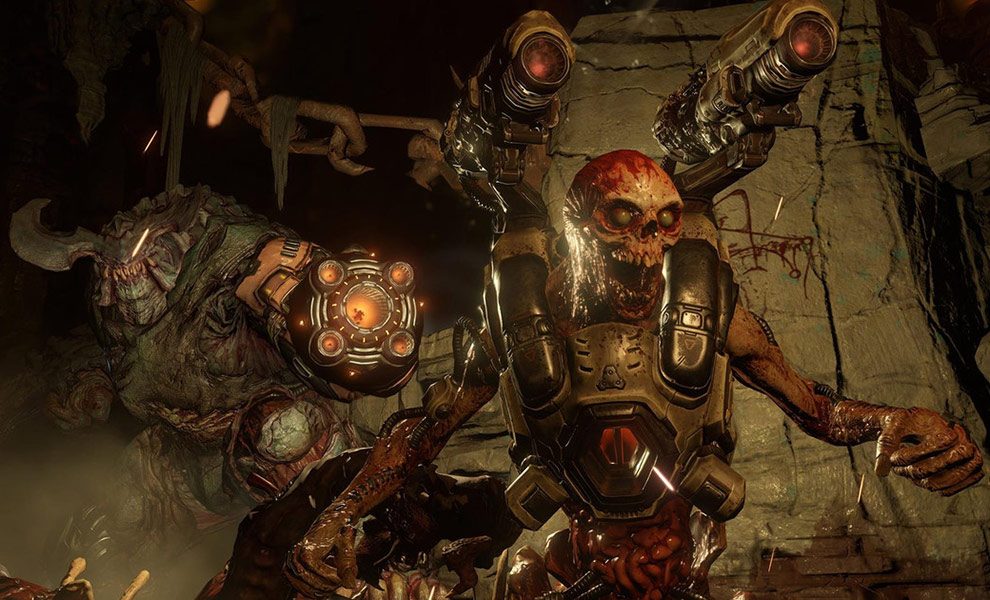 One of the very first computer games I ever played was created by id Software, a little game called Wolfenstein 3D. There were no games like Wolfenstein on Atari or the Nintendo Entertainment System, and it blew my mind. Little did I know that a little over a year later another game would be released that would blow me away even more… that game was Doom.

I remember it vividly, my older cousin came over one day to help fix some stuff on our original PC computer… all 25mhz, 800mb hard drive, of it… and brought with him a stack of 3.5″ floppy disks with the Doom install files on them. Back in 1993/1994 it took multiple floppy disks to hold all 5-12mb of the game. Yep, it was a beast.

Once the game was installed, I would spend hours playing. I found every secret and beat it on every difficulty level, it was a gaming experience I will never forget.

Flash forward to 2016, 23 years after the release of the original Doom. id Software decides to try and breathe new life into the franchise by releasing a new DOOM game for the next generation consoles. This wasn’t the first Doom game released in 23 years, but it did seem to garner a lot more hype than the 2004 release of Doom 3, and rightfully so. Once I finally got my hands on DOOM from Gamefly, I was hooked.

I’m not going to give a full review of the game, because my experience with the Doom franchise is different than a lot of people, but I am having a hell of a lot of fun with this game, and I haven’t even tried the multiplayer yet. To me, the allure of Doom is the single player campaign since that’s all there was when the game was first released in 1993. So the multiplayer aspect hasn’t really struck me as something I’d want to get into, especially since I’m enjoying more of the slower, strategic multiplayer gameplay of Rainbow Six Siege at the moment (it’s even pulled me away from Call of Duty).

The Doom single player moves you around between a research facility and hell as you battle big ass monsters and some of your favorite enemies from the original Doom games. All your favorite guns are back, like the shotgun, the chaingun, the rocket launcher, and of course the BFG. It’s basically a modern trip down memory lane for those of us that played the original game back in the day. The gameplay is the same… run around the maps looking for the keys that open the colored doors to progress through the levels. There is a story here as well, I just haven’t been paying much attention to it. I’m enjoying killing the enemies too much.

So I think people that know the Doom series, and experienced it back in the 90’s, will absolutely enjoy this game as much as I am. And I think that even modern FPS players will probably enjoy the single player experience, but I’m not sure about the multiplayer. As I said, I haven’t played the multiplayer yet… in the final game, but I was a part of the beta, so I kind of know what to expect. I think most multiplayer people these days are looking for something that plays like Halo or Call of Duty, and this does not. Doom multiplayer is way more fast paced and chaotic, but if you like that, or you really enjoyed Quake 3’s multiplayer, you would probably enjoy this.