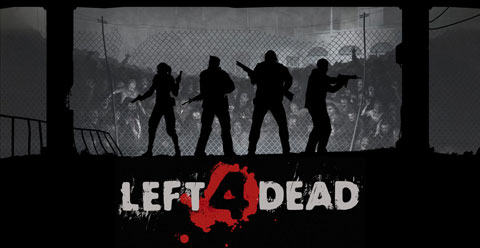 I will admit that when I first played the demo for this game I was not impressed. It seemed like the characters on screen floated across the ground instead of running, they were just really fast and it just seemed pointless. The whole point of the game was to run from point A to point B, while killing infected/zombies… Now don’t get me wrong I love zombies, and games revolving around zombies, except Dead Rising, which was a total let down, but I just didn’t see the point of this game based on the demo. And it was at that point that I told myself I wouldn’t buy it…

Skip ahead about a month and I got Call of Duty: World at War and blazed through it so I could try this Nazi Zombie mode that everyone was talking about. Once I finally unlocked it I instantly fell in love. I would kill zombies all day/night sometimes trying to see how far I could get without glitching. And while it was extremely fun, it got extremely old and repetitive after a while. Being stuck in the same house, shooting zombies through windows is fun, but I wished they could expand on the idea… which lead me back to Left 4 Dead.

I started reading some reviews and watching videos of Left 4 Dead to see if I thought I would actually enjoy the full game more than the demo, but it really seemed that the full game was basically the same thing, just more levels. But when I thought about it, that’s exactly what I wanted out of Nazi Zombies, so I thought I’d give it a shot. Now seeing as how I didn’t even want the game in the first place, and I had gotten screwed before by paying full price for Dead Rising and being let down, I decided I wasn’t going to pay $60 for this game, so I headed over to eBay. I ended up winning an auction for like $42+4 shipping… not bad, about $20 off retail (after tax), but now I had to wait.

I immediately told a couple friends that I had bought the game, since they had been thinking about getting it, and one of them ran out instantly and picked it up, the other… he needs to realize that there are somethings in life that he needs to sacrifice in order to feed his gaming hunger. HA! So I sat in anticipation for a few days waiting for the game to come and when it finally did it completely blew away all expectations I had of the game based on the demo.

I started playing the campaign by myself and, not gonna lie, it was a little boring, but still better than Dead Rising. So I played for a while until Mike wanted to play online, so we did a little campaign action. Let me tell you, if you don’t have xbox live, you may not enjoy this game, but if you do have xbox live, don’t play by yourself and don’t play the campaign mode. Mike and I started with campaign the first night and played for about an hour so I could get the controls down and figure out the game. We had a good time, but it wasn’t really the experience that I was expecting based on what I had seen and read online. Where was this unbelievably fun online gameplay everyone was talking about? Where were the endless hours of replay value that I wanted out of the game?

The next day I found the answers I was looking for and a whole lot more. Versus mode… incredibly fun, insanely intense, and just overall an amazing time. It’s almost the same as campaign, but instead of just running around killing infected and trying to get to the safe room, you have a team of 4 special infected that are trying to slow you down and kill you before you make it there. The cool thing is that after each attempt to make it to the safe room, the teams switch sides and you become the special infected or vice versa depending on what you played as the previous round. This adds a great variety of gameplay to the versus mode that you just don’t get in the campaign mode. And the versus mode is harder, A. because it’s not AI chasing you around the levels and B. there are more special infected in versus than in the campaign mode because the other team respawns after they die, making everything a little bit harder and more intense.

I spent most of Saturday playing versus mode and I played the same set of 4 or 5 maps (there are sets of maps per each area) all day and never got bored with it. I’m actually excited to play the same maps later so I can find some better hiding places as the special infected. I can honestly say my only complaint with the game right now is the fact that you can’t look down the sights of the gun (like in CoD). Other than that minor issue the game is pretty solid and the gameplay is extremely fun. But like I said before, if you’re not playing online, I could see it becoming a little boring, but there are plenty of achievements to get throughout the game which gives you a ridiculous amount of replay-ability if you’re an achievement whore.

So am I glad that I got them game? Absolutely. Do I still think it’s not worth $60? Absolutely not, this game is worth every penny that it costs in the store. So I highly recommend you go pick up this game, it’s probably the most fun I’ve had playing a game since Golden Eye on the the Nintendo 64, ok, well maybe not that much fun, but it’s a lot of fun.