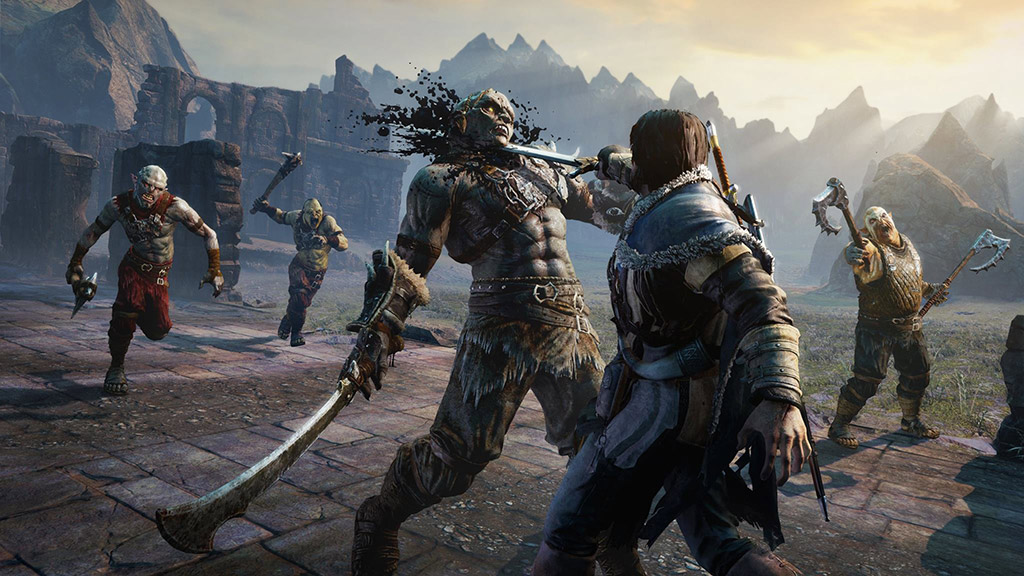 I know it’s been a little while since Middle-earth: Shadow of Mordor was released, but sometimes it takes a while for Gamefly to ship newer releases. So with that being said, I figured now was as good a time as any to give my thoughts on the game after having played it for a few weeks now.

Flat out, I really enjoyed this game. There are not a lot of games that I’ve played recently where I can honestly say that I enjoyed them completely from start to finish, but Middle-earth: Shadow of Mordor is one of those games. I know it’s probably a bad thing to say, because people put a lot of work in to it, but I don’t  even really know what happened in terms of the story. It started off and you’re this hunter named Talion in a battle with the Black Captains and your wife and kid get killed, and then you get killed, but then you come back from the dead after having merged with Celebrimbor, who is some sort of Elf Lord. You and Celebrimbor then set out to seek revenge on Sauron for killing everyone. I think that’s the gist of it.

When it comes to some of these games, I just end up skipping a lot of the cut scenes and actually playing the game, since that’s what I enjoy. I can appreciate the art that goes into writing the stories and making them compelling, but at the end of the day I’m playing a video game because I want to play a game, not watch a movie in between playing a game. If I wanted to watch a movie I’d just watch a movie.

So basing my review on the fact that I honestly don’t care about the story, the gameplay itself is a hell of a lot of fun. You are basically just running around an open world map killing orcs, orc captains and orc warchiefs in an attempt to weaken Sauron’s army to the point where you can take on the Black Captains yourself. All of the story elements come in the form of quests which are scattered around the open world, but along the way you will also run into various enemies and side-quests you can complete the help level up your character to become more powerful.

The quests themselves do become a bit repetitive since you’re basically just going around killing the warchiefs in different ways, but despite that fact, I still found them to be fun to play each time. Even the power struggle quests, which are quests outside of the main story quests, that help you gain power and level up your character, are a lot of fun. It’s just plain fun to hack and slash through some orcs, plain and simple. And despite the fact that you do have to grind just a bit outside of the story quests to build up power in order to face some of the later foes, I never found the game boring. I actually wanted to go through and finish out all of the side quests, but with a newborn baby it was tough even getting through the main storyline.

Graphics wise I thought the game looked great. They really went all out to feel like you were immersed in the world and there are a lot of little subtleties that I thought were really cool. For instance, if you defeat a Captain with an arrow to the face, the next time you come across that Captain in the game he will have a big iron piece over half of his face where the arrow pierced in. It’s just little things like that, that stand out for me graphically when I play a game. A game doesn’t necessarily have to have the greatest graphics in the world, as long as there was attention to detail and the gameplay is fun, and this game definitely has both.

So if you’re looking for a fun hack-and-slash type game, that has some RPG elements, but not enough that it’s overwhelming, I highly recommend checking out Middle-earth: Shadow of Mordor. It’s held my attention for longer than a lot of games have recently, so that’s saying something. I even bought Dying Light right before Gamefly shipped me this one and I haven’t gone back to play Dying Light yet, which is also fun, don’t get me wrong, but I just really enjoyed this game.

A couple of our other editors on the site had this to say about the game:

“I really liked how it felt like an extension of the Peter Jackson movies. They did a good job blending the art direction and character models with the established look and feel.” – Ben

Microsoft’s Latest Effort to 1.0 the Xbox One
Bethesda Shows Off DOOM at E3 2015
Comment