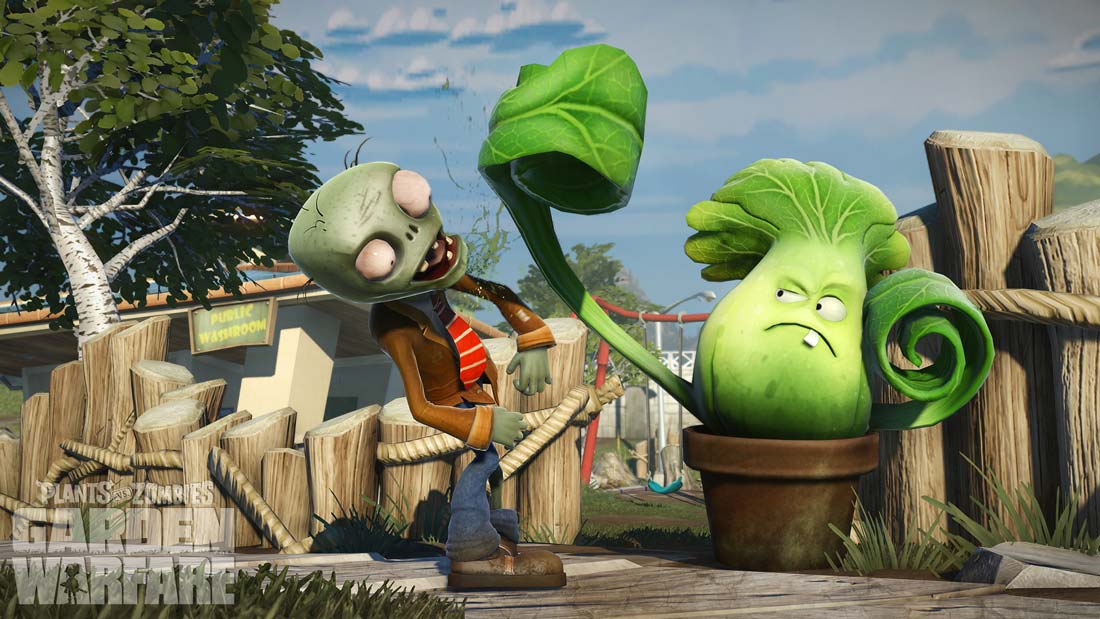 24-player multiplayer action: Choose your side, plants or zombies, in 24-player online battles

Customisation: Personalise your favourite plants and zombies with hundreds of unique items and customisations

So I am sure everyone has played PVZ on some platform or another. If not, I would definitely suggest it. The folks behind the creation decided to bring a whole new type of game-play to this fun franchise!

Like I said above, if you have played this you are familiar with the above-side-angle view, well in this new installment, the player gets a nice 3rd person view, or behind the avatar and over the shoulder. If you do not know what that is, see Gears of War or SOCOM, or whatever game you can think of that has a 3rd person view.

Regardless, lets get into some logistics and whatnot. So I downloaded this for my Xbox One because it was only around 40$, so in a sense that is a pretty good deal! There are a handful of game modes, mostly multiplayer or co-op. So without delay lets jump into the different types of modes you can play.

Garden ops can be played as single player or co-op mode. It is a survival mode that puts you against 10 hordes of zombies, which is dependent of how many players are in game. Up to four players, including yourself, can play at a time in a public, private or invite only game. Your main objective is to protect the garden that you plant (designated by on screen garden logos) until Crazy Dave comes back. Once the garden life level gets to 0 all the players are knocked out. If indeed you make it to the 11th wave, the players have 1:45 to get to an extraction point or landing zone while a large horde of zombies chase you. You get to choose between 4 different plants, which I will break down below. You may only re-spawn Plant Characters or Spawn-able Plants, and that is limited to only a few re-spawns.

From time to time, Crazy Dave will give you bonus objectives to achieve (no garden damage, etc), giving you a fun addition to all the zombie killing. Also as you progress through the hordes, Dr. Zomboss will appear with a slot machine that determines what the team will be facing on the next wave.

Some of the crazy zombies that you could encounter with this are:

If you get three of a kind, you will trigger a “Super Boss Wave.”

So as I mentioned before, here are the 4 types of plants you can choose from (See Below)

Now, after a long description of the single player and co-op, we can now jump into the multiplayer modes. I will try and keep this short-er.

Welcome Mat is a mix between Team and Gardens for the newcomers to shooter games. The worse you do in the game the more health you start out with when you respawn. There are some limitations. While there is no restrictions to leveling up, you will not be able to use customization’s or unlock-able characters.

Team Vanquish is your basic Team Deathmatch if you will. Up to 12 plants and 12 zombies battle on a medium size map to keep the action up. The first team to get 50 vanquishes or kills, wins the match. One neat thing is if you vanquish an enemy the point you got for the kill can be deducted by reviving a teammate. You of course can not use spawnable plants or zombies.

Gardens and Graveyards is an objective gamemode. This is like your domination or headquarters type of game. Again up to 12 zombies and 12 plants battle it out on larger scale maps with the objective of capturing and protecting gardens. Each garden takes up to 40 seconds to capture and in order to capture you must have more plants than zombies at the garden or vice versa. The main objective though is for the zombies team to capture the gardens and then complete a final objective on the last base to achieve this. On the other side of the spectrum, the Plants must protect these gardens until the timer goes off, which is after 7 minutes.

Classic Mode is a variation of the two multiplayer game modes (Vanquish and Gardens). This forces the players to play without upgrades and customizations. A nice mixed bag of play time.

So there is a little bit about the game. I have enjoyed playing it. You also can get up to 45 unlockable achievements, which adds up to 1000 points, giving you a nice little personal objective. For fans of the franchise, give it a try, if you’re not too busy playing Titanfall or COD. It has an enjoyable assortment of gameplay and quirky animations. So enjoy your gaming and feel free to comment or whatnot.