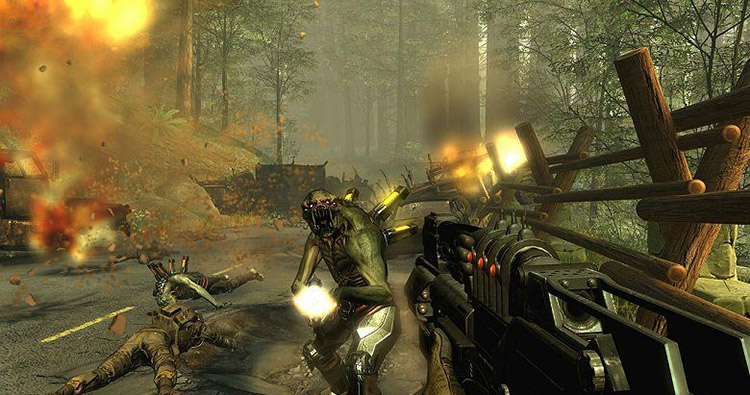 A little info up front first, I’m not a PS3 gamer, I only bought the system for the Blu-Ray player back when it was the cheapest Blu-Ray player on the market and the only future-proof one. I hate the Playstation controller (not just the PS3 one, but all of them), I could never get used to the feel of the analog sticks. They just seem to close together and not very responsive, almost loose. I also don’t like the way it feels in my hands. I don’t have the largest hands around, so you’d think the controller would feel better to me, but it doesn’t. Oh and I’ve never played Resistance: Fall of Man, so I can’t really compare Resistance 2 to that one.

So with all that in mind, here we go.

First of all the beta is huge, clocking it at about 2.2gb it took a long time to download. After I was finally able to install and sit down and play the game I couldn’t get into a Competitve game for the life of me. The “Play Game” feature that supposedly just searches out any open games and dumps you in them, couldn’t find any open games apparently. I was able to get int a Cooperative match which was fun for about 30 seconds. Maybe it was just the people I was playing with, but there was no order to anything just seemed like bad guys flocking at you while you died and waited to respawn. I haven’t played enough of Co-Op to really comment on it, but my first game wasn’t the most enjoyable. After about 15 minutes everyone had gotten bored with the match and left, leaving just me and one other guy. We quickly died and that was it.

After being disappointed with the Co-Op mode, I decided to try to get back into a Competitive game, but the “Play Now” was still not finding anything. Luckily they give the option to browse a list of current games that you can try to jump in and I was able to get into one, but again I was disappointed. This could be because of my lack of playing Resistance or my dislike for the PS3 controller, but it just didn’t control well for me. The levels look nice, that’s for sure, but they are extremely small. It seems like everytime I spawn, I’ll run 4 feet and someone will respawn in that same spot and just shoot me from behind. After a few games I started to get used to the controls and was finishing in the top 3 in most rounds, but I still didn’t find it enjoyable. After each round was over the game would just start a new game on the same map instead of switching to a new one. That might be a host setting, but it got annoying. I liked playing with some people, but got bored because it was the same map with the same snipers and spawn killers.

I don’t know, based on the beta I’m not too impressed. When I played the original Resistance: Fall of Man demo I actually enjoyed it and might pick it up when it drops in price, but I won’t be rushing out to purchase Resistance 2 right now, at least not based on the multiplayer anyways. I have read that the single player campaign is pretty good though, so even if the multiplayer is horrible that should make up for it. And again, take this “review” for what it is, an extremely bias account of my first time playing Resistance online. It’s also the only game I’ve ever played on the PS3 online (aside from the LittleBigPlanet beta, which is a different type of online).