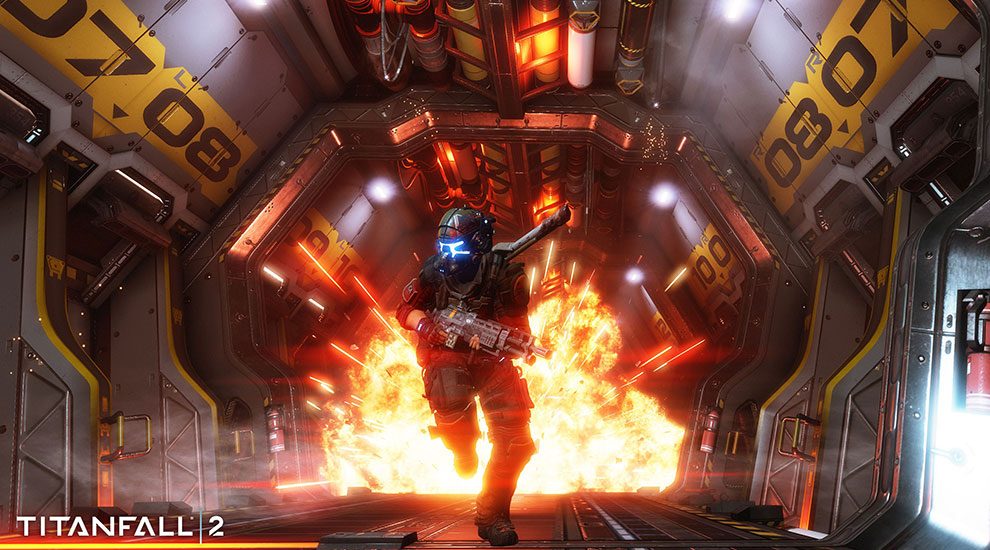 The biggest improvement that Titanfall 2 made over it’s predecessor is the addition of a single player campaign. The first game’s “campaign” was basically just multiplayer games with some random storyline interjected throughout and it wasn’t a true campaign, but Titanfall 2 comes at us with a fully immersive single player mode that I, and many others, have thoroughly enjoyed.

The game centers around you and your newly acquired Titan “BT” as you traverse through the world trying to complete the final mission contained within BT after his original pilot dies.

It’s not the longest campaign in the world clocking in at just over 4 hours, depending on how fast you plow through it, but it is quite a bit of fun due to the mechanics of Titanfall. As I mentioned before, the thing that I hate about Call of Duty is the thing I love about Titanfall, and that’s the movement system. Being able to traverse the world by double-jumping and wall-running is a lot of fun, when it’s what you expect out of a franchise. In the case of Titanfall, it’s what you expect, in the case of Call of Duty, it’s not, and Titanfall does a much better job if it in my opinion.

The campaign missions/levels are expansive and take full creative use of the movement system. I can’t remember the last time I had this much fun playing an FPS campaign. One level in particular, where you have to time your jumps in a particular way due to the fact that you can switch back and forth between time, is awesomely impressive and fun. I love games that offer a great gameplay experience, instead of just going for big set pieces and special effects, and this hit on all levels. Even the relationship between you and BT brought an emotional aspect to the game that I can’t remember getting out of many FPS games in the past. And, on top of all of that, there are actual boss battles! The boss battles were pretty cool, although I think I might have needed to up the difficulty level a bit since they seemed a bit on the easy side.

So between the awesome level design that takes advantage of the movement system, the actual story, BT, and boss battles, Titanfall 2 gives you a pretty stellar single player campaign experience even if it is a bit on the short side. And I’ll take whatever single player I can get since the original Titanfall had nothing to offer.

The multiplayer is just as fun as the original, but there are some tweaks that have been made that I’m not 100% sure about. The game still maintains that extremely fast paced action that we know and love from the first one, as well as the awesome fluidity of switching between being a pilot to running around in your Titan. The movement system is still spot on and allows you to traverse the maps with ease, quickly, while still being able to lock on to those enemy pilots and blast them out of the sky. The Titan movement system also feels just as solid as I remember from the first one.

I think if you were a fan of the first Titanfall’s multiplayer, you will still enjoy the gameplay experience in Titanfall 2’s multiplayer. I know a lot of people were complaining about certain changes they made to the game after playing the beta, but overall it definitely still feels like Titanfall.

As I said, there were a couple of changes made to the multiplayer aspect of the game that some people aren’t too fond over, and I can see why, but I don’t think it’s as huge of a deal as people are making it out to be. The removal of the regenerating shield on your Titan as well as the removal of rodeo killing a Titan are two of the most complained about features. I don’t think they are horrible. It allows for a better balance of pilot assault and Titan assault I feel. In Titanfall 1, there were plenty of times where it was just all Titans all the time. And I get that the game is called Titanfall, but sometimes objective games could quickly become very one sided if the other team just had all Titans all the time. I think that eliminating the overshield and making it so that rodeoing a Titan only allows for a stolen battery (which can then be placed in your teams Titans) is a nice way to balance things a little bit.

I also miss the smart pistol not being an actual gun and instead being one of the special perks you can assign, but it was a little powerful in the previous game, but damn was it a lot of fun.

So those are the main gripes that a lot of people have with the multiplayer at the moment and I don’t even think they are that big of a deal. My main gripe with the game so far is the lack of ability to track your challenges and the fact that regenerations don’t have challenge requirements. That was honestly the thing that kept me going in the first Titanfall. I like knowing how many more kills I needed to max out a gun and get a challenge and things like that. I also liked the challenge of having to do certain things before you could regen, and now that they are gone I’m a little upset. Hopefully Respawn decides to add those back in, but we’ll see.

I really like the Titanfall series and am not disappointed in Titanfall 2 in the slightest. The minor gripes I mentioned above, about the challenges, are just that, minor gripes. They don’t take away from the actual gameplay experience and I’m fine without them. The inclusion of a single player campaign this year made this purchase a no brainer.

So I would say if you’re a fan of the original Titanfall or are just sick of the direction Call of Duty is taking, even though it’s kind of similar to Titanfall, I would pick this game up. The wall-running and double-jumps aren’t annoying in Titanfall because that’s what Titanfall was built on. That’s what the maps are designed for, that’s what the gameplay experience is designed for, that’s what makes this game Titanfall. Call of Duty just threw those mechanics in there to try to change things up and people didn’t want things to change in that direction. I think that the fact that the Titanfall maps are built to hold Titans helps immensely with the decision to add those double-jumps and wall-runs, because the maps feel huge and require that sort of movement, where the Call of Duty maps are much smaller and therefore the movement system just feels forced.

Don’t get me wrong, I’ve been a Call of Duty fan since Call of Duty 2, but Titanfall is a much more enjoyable experience for me these days and I hope Activision figures out what to do with that series, but for now I’m sticking with something else.