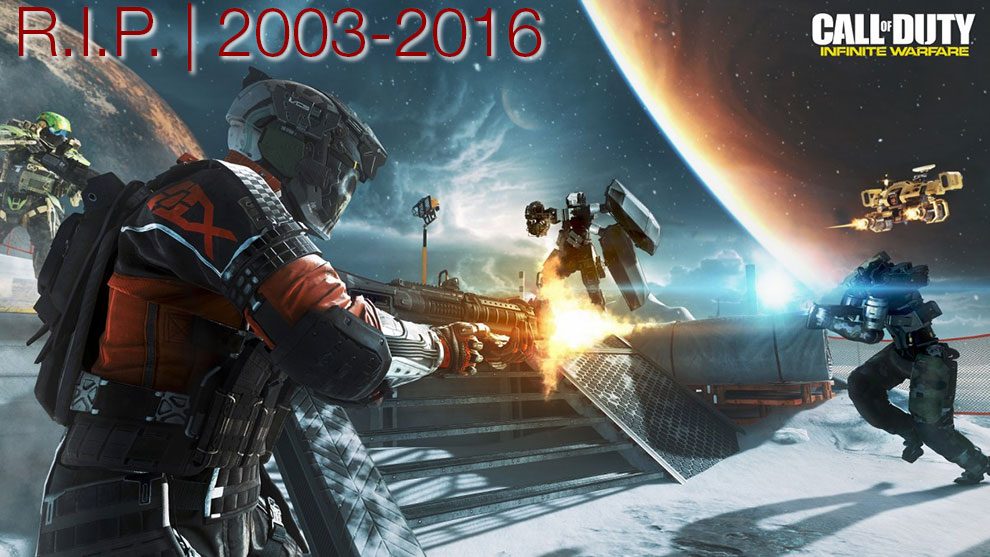 As I’m sure most of you are aware, the Call of Duty Infinite Warfare beta is available for all PS4 users and Xbox One users who pre-ordered the game (unless you can find a beta code). It’s no secret that my love for the Call of Duty series has dissipated with the recent releases of the game, but I’ve still always pre-ordered them and still got excited to grind through the levels on launch day… But I think my love affair with the Call of Duty franchise might be over… at least for now.

After spending a few hours with the Infinite Warfare beta, (and yes, I understand it’s a beta), I’m positive I made the right choice in NOT pre-ordering this game. I even thought about pre-ordering it just to get access to the Modern Warfare Remastered edition, but for $80, I definitely made the right choice in not putting down my money. Hopefully, down the line, they will release the Remastered Modern Warfare game on it’s own for $20, at which point I will purchase it in a heartbeat, but for right now, I’m just going to continue playing Rainbow Six Siege and Titanfall 2 next week.

So why do I feel this way after only playing a beta version of this game for a few hours? Well it’s not just this beta that has brought me to this conclusion, it’s a culmination of this beta as well as Advanced Warfare and Black Ops 3. The game has taken such a turn from where it used to be, that I just can’t continue to support it…. nor do I even enjoy playing it anymore. And that’s kind of weird, because I really love Titanfall, and many of the aspects I don’t like about the last few Call of Duty games, are things that I love about Titanfall.

The wall running, double jumping, thrusters, and general overall movement of the latest Call of Duty games as completely destroyed any fun I had with the game. Honestly, Ghosts is way more fun than any of these more recent entries in the franchise. The reason I fell in love with Call of Duty in the first place was because it was a boots-on-the-ground, war game. You ran around with guns and you shot at each other, that’s it. You didn’t jump from roof to roof,  you didn’t run along walls, or turn invisible, none of that. You ran around a map with a gun and you shot people… that’s what I loved about the game. My first entry into the Call of Duty series was CoD 2 on the Xbox 360, but I was playing online FPS war shooters before that with the Medal of Honor games (Allied Assault was also developed mostly by Infinity Ward members before forming IW). So I’ve been playing these games since before Call of Duty, but CoD2 reinvigorated my love for the genre. And the fact that I didn’t have a capable PC anymore, and Xbox Live was now fully developed and integrated into the 360, instantly got me hooked.

I, like many others, were completely underwhelmed by Call of Duty 3, so after finishing the single player campaign, I went back to CoD2 multiplayer and stayed with that until Call of Duty 4 Modern Warfare. And that game was incredible, so ever since then I’ve pre-ordered and max prestiged every game in the series up until Advanced Warfare.

The introduction of the exo-suits and “abilities” killed the franchise for me. And since that trend apparently isn’t going anywhere for at least a year… I’m done. But what about Titanfall…

Titanfall isn’t Call of Duty. Sure, it was developed by a bunch of ex Infinity Ward folks, but it’s still not Call of Duty and it’s not trying to be… at least the 1st one wasn’t, we’ll see about Titanfall 2. I like Titanfall because from the start I knew what it was. There were double jumps and wall running and giant robot mechs, and AI players, and all of that stuff. But since it was the first game in the IP, I had nothing to compare it to. And it also came out before Advanced Warfare, so the movement felt new in general. And because of the way the game is balanced, with the titans, the maps are absolutely huge, which makes the double jumping and wall running feel like a necessary aspect of the game to keep things flowing and keep the balance. Where as in Call of Duty, the maps are still on the smaller size and the movement abilities seem forced for no reason other than to do something different (which at this point isn’t different). Sure, it adds a new level of gameplay to the game, since you have to look up and down now instead of just at ground level (unless in a building window), but it feels totally unnecessary in this game.

And that’s why I say that I love Titanfall, but am finally over the Call of Duty series. The Infinite Warfare beta just solidified the thoughts I’ve had over the last couple installments in the series. The movement is annoying, the maps in the beta have too much going on, not in terms of overall level design, but the textures themselves are super distracting and annoying. I don’t like the robot characters, I don’t like the future aspect of the game at all… hell, I got killed about a dozen times from a robot dog running around the map… what the hell is that?

I knew this time would come, I just didn’t think it would be so soon, but it’s time to say goodbye to Call of Duty. And I hope it’s not forever, I hope they go back to their roots and give the fans what they’ve been asking for (which is evident by the response to the Modern Warfare Remaster), but until then, I will stick with Rainbow Six Siege and Titanfall 2. And I know there are some people out there that are absolutely loving the beta and Infinite Warfare so far, and good for them, but it’s just not for me anymore.

Thanks for 10 years of fun Call of Duty, hopefully we meet again.