I know it’s probably just a glitch in the way the kill cam was presenting the information, and it’s not actually what Blackbeard saw as he made this kill, but it was still pretty annoying to see this happen, especially after we weren’t really winning any games this morning.

There’s no doubt that from my perspective (xMrBelding1), that Blackbeard had the advantage by being outside the bright window. I saw him just slightly before he headshotted me, but the real magic happens when his killcam comes up. You can clearly see me peaking from behind the shield and couch, but then Blackbeard just unloads on the piano and headshots me. Bouncing bullets anyone?

Like I said, I’m sure it was just a case of the killcam not being fully representative of what Blackbeard actually saw, but it doesn’t make it any less annoying or frustrating. Rainbow Six Siege is still one of our favorite games to play, but Ubisoft has to make it a little better of an experience. 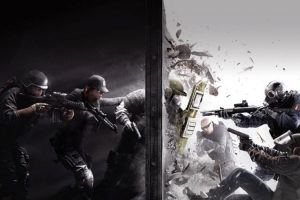 All of The Upcoming Content for Rainbow Six Siege